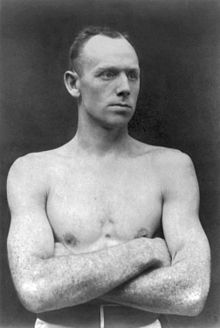 Robert James “Bob” Fitzsimmons (26 May 1863 – 22 October 1917) was a British professional boxer who was the sport’s first three-division world champion.He also achieved fame for beating Gentleman Jim Corbett (the man who beat John L. Sullivan), and he is in The Guinness Book of World Records as the lightest heavyweight champion. Nicknamed “Ruby Robert” and “The Freckled Wonder”, he took pride in his lack of scars and appeared in the ring wearing heavy woollen underwear to conceal the disparity between his trunk and leg-development.

Considered one of the hardest punchers in boxing history,  Fitzsimmons is ranked as No 8 in Ring magazine’s list of 100 greatest punchers of all time.