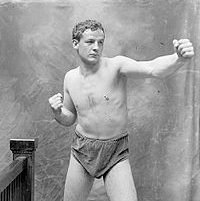 Hart, nicknamed “The Louisville Plumber” because of his former trade, gained considerable prominence after a 1905 . That year, the heavyweight title was left vacant as a result of the retirement of champion James J. Jeffries and Hart’s record earned him a chance to fight for the championship against top-ranked Jack Root (1876–1963), a much more experienced boxer, who had already beaten Hart in November, 1902.

Jeffries, the retiring champ, refereed the championship fight on July 3, 1905 in Reno, Nevada. Hart knocked out Jack Root in the 12th round to win the vacant championship. After one successful exhibition match, Hart lost his championship to Canadian Tommy Burns on February 23, 1906 in Los Angeles. Burns won the 20-round fight by decision.